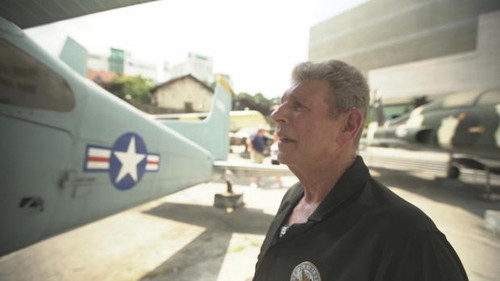 Hanoi, Vietnam — Most who served in the Vietnam War have never been back since the war ended. Some have no interest but for others, returning is a crucial part of the healing process.

CBS News was there as 52 U.S. veterans from Wisconsin came back to Vietnam for the first time. Their tour around Saigon is far different from the last. It began where the war finished, at the presidential palace in Ho Chi Minh City, or as many still call it, Saigon.

"I was born and raised on a farm. I never had anybody shoot at me until I got here, when I got to Vietnam," Pierret said. "A 19-year-old kid shouldn't have been here, back then fighting a war. What do I know about war back then at 19."

The tour organizer warned the veterans that their journey would be stressful, especially as they got close to where they served. But there are demons that endure.

"We got into a fight, it was up in the DMZ and and there was a young man, he was dead and I went through his pockets and he had a picture of his wife and his children," Pierret said. "That hit home. Boy did it ever. He was no different than I was. He had a family."

Pierret said he suffered from nightmares.

"It helps me a lot of times just to talk about Vietnam. Like I said it'll tear me up but it gets here, on my chest gets it out," he said.

For Pierret and thousands of others, time goes by. It doesn't go away.

"My nightmares aren't as pronounced as they were when I first got out, but I still get them," he said.

He's hopeful this trip will take some away.